Stay informed - gain insights into trends and developments in global currency markets with our breaking market wires and research reports.

Thank you for subscribing!

Watch for our latest issue(s) to appear in your inbox shortly.

Bank of Canada Conundrum: How Much Should It Worry about Financial Instability

(This article originally appeared in the March edition of FEI Canada’s Finance and Accounting Review. To access it the original version, click here)

The amount of concern that central banks should devote to financial instability is one of the most important, interesting and pressing aspects of modern monetary policy.

It’s also one of the most unsettled.

It’s of particular concern in Canada and other countries where central banks are charged with one highly focused mandate – controlling inflation. The issue may become even more urgent in the coming weeks as the Bank of Canada grapples with the spread of coronavirus and other evolving risks to the domestic economy at a time when the country’s households remain near-record levels of indebtedness.

Unlike central banks in some jurisdictions, such as the Bank of England, the Bank of Canada does not have direct responsibility for regulating the country’s financial system. Technically, it doesn’t have any obligation to worry about the financial health of the players in Canada’s economy.

The reality, of course, is much more complicated.

Bank of Canada Deputy Governor Paul Beaudry, who sits on the Bank’s policymaking Governing Council, explored the dilemma confronting Canada’s central bank in a speech he made in January entitled “Monetary Policy and Financial Vulnerabilities.”

“For an inflation-targeting central bank, the dynamics brought on by financial vulnerabilities are particularly relevant if they create a conflict related to how interest rates may affect the economy in the shorter run versus the longer run,” he says.

Beaudry says the Governing Council confronted that issue at its policy-setting meeting last October when there was uncertainty in the economy and an “insurance” rate cut was under discussion.

“Given the weakness in the global economy, we could have considered a cut to ensure the Canadian economy wouldn’t perform below its potential and pull inflation below target,” he says.

“But given the state of the financial vulnerabilities in Canada, we judged the risk of reigniting an acceleration in house price expectations and a buildup of debt was too high—and that could make attaining our inflation target harder in the long run,” Beaudry says.

In short, an interest rate cut would have provided stimulus that would have helped the economy cope with those uncertainties, but only at the expense of fanning the flames of household debt, the country’s biggest financial vulnerability. 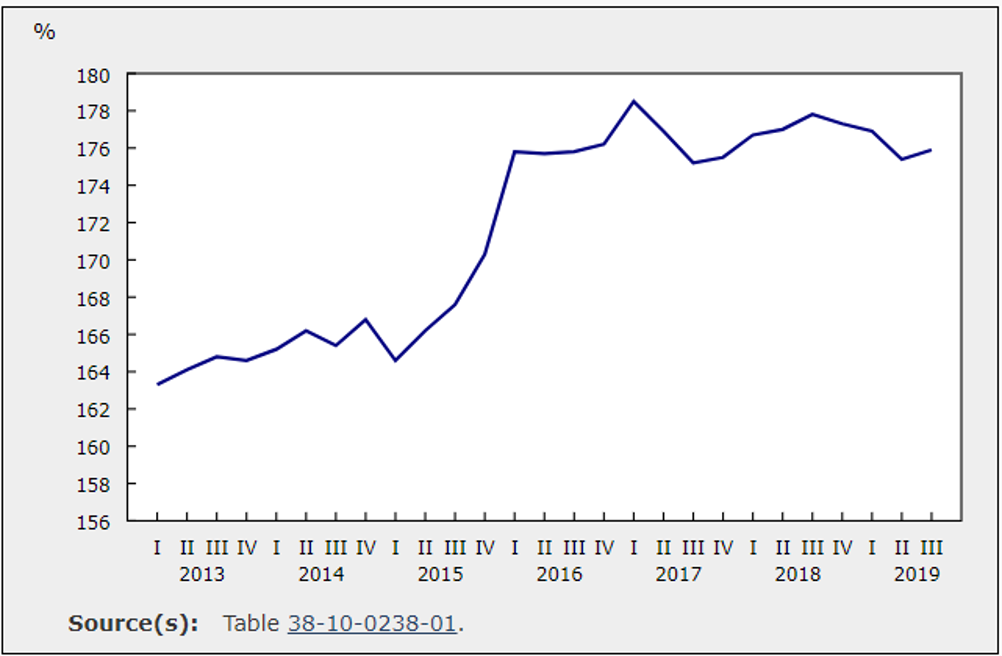 It might help in the short run, but in the longer run, the higher levels of debt could slow the economy down, preventing it from achieving the growth needed to bring inflation back to the Bank’s 2% target.

“The challenge is that the same policy choice that helps the central bank attain its inflation target in the short run may be making it more difficult to attain its target in the longer run,” Beaudry says.

When an inflation-targeting central bank takes note of financial vulnerabilities, it doesn’t mean it’s a case of “mandate creep.” It’s just looking to consider all factors that might affect the impact of the monetary policy changes it’s contemplating.

How does the Bank determine what the potential consequences of its actions might be?

Beaudry says it has recently begun using something called a “growth-at-risk framework,” an approach developed by economists late in the 2010s and supported by the IMF.

It’s also somewhat complicated. What it does is take historical data and estimate how the distribution of GDP growth over time would be shifted by vulnerabilities such as debt-to-GDP ratio. The Bank can then assess whether the impact on growth in the short term would warrant the slowing effect down the road.

“Our standard models tell us how this will affect economic activity now, and we can also use these models to help predict how the cut will increase the debt-to-GDP ratio in the future,’ Beaudry explains.

“Then, by using our growth-at-risk framework, we can quantify the potential tradeoff associated with monetary policy by simply contrasting the increased growth in the short run with the worsening of growth at risk in the future,” he says.

The growth-at-risk framework is one tool for assessing the impact of interest-rate changes through the filter of financial vulnerabilities, but it’s far from a definitive solution, Beaudry says.

“While the growth-at-risk framework offers very important insight, we do not see this as the end state of how we would like to bring financial vulnerabilities into the discussion of monetary policy,” he says. “In particular, this framework still involves a large element of judgment, as many of the relationships are estimated imprecisely. Accordingly, in our current modelling efforts, we are looking to develop a framework that is more explicit about the mechanisms at play.”

So, it’s a work-in-progress.

As Bank of Canada Governor Stephen Poloz is wont to observe, central banking is often more of an art than a science, and a precise and entirely reliable model of the interplay of interest-rate changes and financial vulnerability may never be available.

But it may be reassuring for Canadians to know that as we enter a period of intensified uncertainty, our central bank is at least grappling with this complex issue.

Previous
It's Time to Put Your Payments on the Fintech Bullet Train
Next
Giving SMEs a Voice in Foreign Exchange
This document is NOT: 1) Advice of any kind, or 2) Approved or reviewed by any regulatory authority, or 3) An offer to sell or a solicitation of an offer to buy any FXIs, or to participate in any trading strategy.

Cambridge Global Payments (“Cambridge”) provides this document as general market information subject to: Cambridge’s copyright, and all contract terms in place, if any, between you and the Cambridge entity you have contracted with. This document is based on sources Cambridge considers reliable, but without independent verification. Cambridge makes no guarantee of its accuracy or completeness. Cambridge is not responsible for any errors in or related to the document, or for damages arising out of any person’s reliance upon this information. All charts or graphs are from publicly available sources or proprietary data. The information in this document is subject to sudden change without notice.

Cambridge may sell to you and/or buy from you foreign exchange instruments (including spot and/or derivative transactions; both kinds are here called “FXI”s) covered by Cambridge on a principal basis.

This document is NOT: 1) Advice of any kind, or 2) Approved or reviewed by any regulatory authority, or 3) An offer to sell or a solicitation of an offer to buy any FXIs, or to participate in any trading strategy.

Before acting on this document, you must consider the appropriateness of the information, based on your objectives, needs and finances. For advice, you must contact someone independent of Cambridge.

Certain FXIs mentioned in this document may be ineligible for sale in some locations, and/or unsuitable for you. Contact your Cambridge representative for further information regarding product availability/suitability before you enter into any FXI contract.

FXIs are volatile and may cause losses. Past performance of a FXI product cannot be relied on to determine future performance.

This document is intended only for persons in Canada, the US, and Australia. This document is not intended for persons in the UK or elsewhere in the EEA. In Australia, this publication has been distributed by Cambridge Mercantile (Australia) Pty. Ltd. (ABN 85 126 642 448, AFSL 351278); for the general information of its customers (as defined in the Corporations Act 2001). This entity makes no representations that the products or services mentioned in this document are available to persons in Australia or are necessarily suitable for any particular person or appropriate in accordance with local law.

Fees may be earned by Cambridge (and its agents) in respect of any business transacted with Cambridge.

The document is intended to be distributed in its entirety. Unless governing law permits otherwise, you must contact the applicable Cambridge if you wish to use Cambridge services to enter a transaction involving any instrument mentioned in this document.

Listen to Our Podcast

How embracing AI may revolutionise hedging for treasury managers

Subscribe to gain insights into developments in global currency markets.

Gain insights into trends and developments in global currency markets with our breaking market wires and research reports.